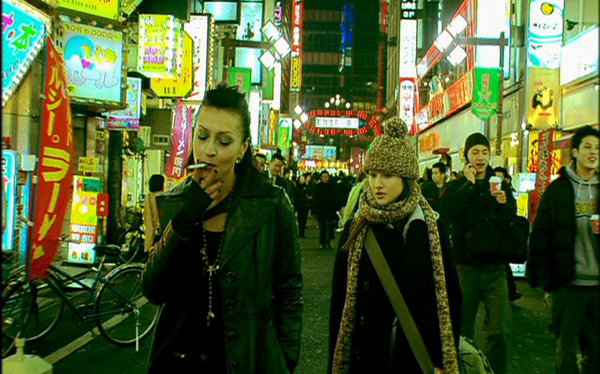 Asuka (Reika Hashimoto) has recently arrived in Tokyo to pursue her modelling career, and while she’s become familiar with some of the local models, she finds herself sharing so very little in common with them. Feeling somewhat alienated and with little cash to her name she’s uncertain as to how far she’ll go in this city. As good fortune would have it, though, she’s pointed in the direction of former model Kasumi (Kaori Kawamura), who in contrast to Asuka is a hardened, laid back and street-wise gal who only looks out for number one. Kasumi decides to let Asuka stay at her apartment for one night, but she quickly develops a fondness for the young woman, which soon sees Asuka’s luck turn around.

One evening, however, Asuka witnesses a murder from an apartment across the street. When the police arrive, led by Shirasaki (Shunsuke Matsuoka), they discover a male victim spread out on a bed with voodoo markings carved into his remaining flesh. This unusual, yet precision-based killing, which has left no traces of evidence in a room locked from the inside, leads investigators to believe that perhaps there are mystical forces at play. But the murders soon escalate, each one more bizarre and horrific than the last, with the only clue to each being a calling card which simply displays a kiss marked by black lipstick. As the bodies begin to pile up it soon becomes clear that each victim has in one way or another been linked to Kasumi – and it wouldn‘t be the first time given her past boyfriends’ untimely deaths –  enough to have earned her the nickname “The Devil“. Asuka may just be in more trouble than she knows; she even has her own stalker! (Masanobu Ando).

Within the first ten minutes of Black Kiss a few things are apparent – Makoto Tezuka (son of legendary manga-ka and animator Osamu Tezuka) adores Hitchcock and Giallo, with his rain-soaked sleazy streets paving the way for an assortment of healthy references. There’s little subtlety at all in issuing sly nods toward some of Hitchcock’s quintessential thrillers: The Bats Motel and its staged shower sequence, or the Vertigo Nightclub and voyeuristic Rear Window set-up. This certainly raises a smile and gives us the impression of a film-lover paying much respect to a true master, all the while adopting a thriving colour scheme to shape his own film’s grisly undertones and highlight the workings of the Red-Light District. With the help of cinematographer Shirao Kushiro, Tezuka pays additional homage to auteurs such as Dario Argento and Norifumi Suzuki; directors whose own style it could be said is inimitable. However, Tezuka does a remarkably good job of re-creating such well established tones with stark green washes, deep reds (fnarr) and piss-yellow hues, the film’s lighting and compositions being the key toward Black Kiss’s overall success as a feast for the eyes.

Shot in High Definition, it wouldn’t ordinarily be an easy thing to achieve; the lack of real grit in the source materials for instance tends to leave an almost too pristine and clinical looking palette that doesn’t quite bare the same sting as the Giallo genre did, and yet it doesn’t really lose its integral film-like qualities either. At times Black Kiss feels considerably raw – almost pseudo-documentary in parts – and its editing a tad non-linear, with many a sudden inter-cut. It leaves few precious moments for its audience to feel safe, with an intriguing atmosphere that shrouds a convoluted narrative.

Although Black Kiss’s visual influences are indeed broad, it’s the aforementioned narrative which sees Tezuka lend more of a personal touch. The script evolved from a short story of his written ten years prior about an occult detective (Clive Barker anyone?) being drawn into a mysterious case. The film was originally labelled as Synchronicity, a title spoken by the director to literally translate as “Meaningful Coincidences”. It’s perhaps more apt, then, that the working title holds more value than the hipper sounding one we ended up with. While Tezuka has spoken of developing the mystery of his psychological film and how each character correlates to one another, he doesn’t readily talk about the nihilistic social undertones that permeate throughout.

Black Kiss appears to be quite the cynical production. Sure it works as a heightened thriller that keeps us on our toes every step of the way, but it harbours an unmistakable mean-streak as it tends to often revisit Japan’s superficiality with relation to choice sectors of the entertainment industry. Right from the film’s opening sequence young girls are being readily plucked off the streets to be made into “stars”, while aspiring models are being exploited by smooth operators in fancy restaurants who are simply after a good time. Soon afterward, as we’re taken behind the scenes of a fashion shoot, we bare witness to some cruel jibes aimed in the direction of Reika Hashimoto’s naïve out-of-towner, reminding us of an upper-class, cut-throat industry, which – here it suggests – goes hand in hand with that of the seedier underbelly of society. Tezuka thus sets up a side-plot focusing on the innocent Asuka struggling to get by in the big, harsh city, who in many ways isn’t a great deal unlike the equally shunned Kasumi with her jaded past. This then plays on some of the ideas explored in an earlier feature of his: Hakuchi [The Innocent] (also featuring the director’s fave, Hashimoto). His themes of isolation, dejection and loneliness tie in well with the larger scheme of things and create lead characters who have an appreciated amount of depth; this can indeed be considered a strong tale of friendship as much as anything else given the way it plays on chance encounters altering the course of someone’s life. Moreover, each time I sit down to this the more I seem to pick out even the intricate murders as being an unspoken gesture in themselves. If looking at how Masanobu Ando’s stalker/photographer is handled, for instance, it’s almost as if the overtly imaginative killings are speaking out against a pretentious art world: mutilated bodies are tied with neat ribbons and nicely packaged; dolled up to look like shop mannequins, or intricately stripped apart as they lay on silk sheets, revealing their internal organs like they were the work of a proud sculpture. Certainly not dismissive by any means, it only goes to add an extra layer to Tezuka’s evidently ambiguous script.

At 133 minutes in length, however, Black Kiss is unnecessarily lengthy. The story has all the makings of a solid TV drama, what with the director cramming in so many ideas. To be fair he handles things quite well, even if it might not be an entirely smooth ride. Not only is he dealing with all of the aforementioned but he’s additionally trying to create a tense mystery thriller by throwing in an investigative angle featuring local detectives. Forthwith he sets up a slew of red-herrings and quite literally every character is a suspect; some of these work wonders in frustrating the viewer, while others can be irritating if simply because the director is pointing fingers for the sake of it, but like a good episode of Morse it keeps us guessing right until the very end, by which point the machinations of the plot start to get a little out of hand.

Spoilers for the duration of this paragraph.

While the film’s conclusion ultimately makes sense it does go against a more lateral way of thinking. Considering the extensive build-up and a somewhat grounded sense of reality that it seeks to present, it becomes a stretch to buy into the unfathomable and mystical reveal of the killer, which ties in to earlier scenes detailing ritualistic voodoo: an abnormally agile professional killer who dresses as a gimp! Sure enough Tezuka cheats us real good and you can even sense that he’s feeling pretty happy with himself. Yet I’m not particularly annoyed with him, he does give us a good run for our money and I’m all too happy to suspend some disbelief given that overall he’s managed to create an intriguing tale that does indeed present a little substance along with its style.

This entry was posted in Uncategorized. Bookmark the permalink.